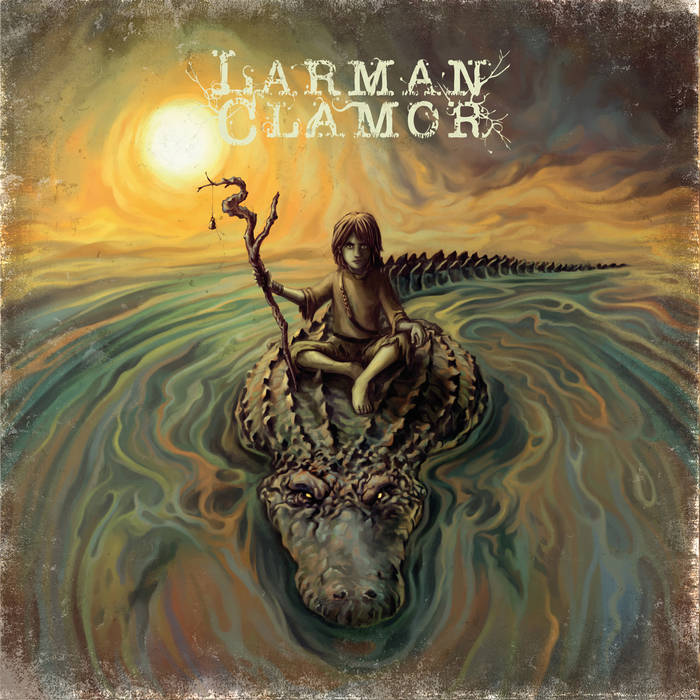 Steve Rodger This reminds me of some of the artists on Blues record label Fat Possum I love like R.L Burnside and Junior Kimbrough . Larman Clamour is the alter ego of Small Stone cover artist Alexander Von Wieding. Very swampy.. Favorite track: She Sent Her Hounds.

Harry Harrison Having already owned the last album ‘Frogs’, I was looking forward to see what ‘Alligator Heart’ had to offer and let me tell you, I wasn’t disappointed. Whereas most bands get more polished on their sonic journey, Larman Clamor have gotten more raw and earthy; and somehow, better. So if you’d like a little swamp stomp in your music collection, then this is the album for you. 5+ stars. Favorite track: Perdition At Dawn.

Larman Clamor is throwing a carnival. More of a street fair, really. You’ll find the sky is tinted a greenish yellow watercolor, the air is tepid and wet with humidity, bugs come in swarms, and later, a parade of children on the backs of reptiles will come out of the swamp and march down the crossroad.

The third Larman Clamor full-length, Alligator Heart follows on the heels of 2012’s Frogs, 2011’s Altars to Turn Blood and that same year’s debut self-titled EP. It is the most accomplished release to date from the solo-project of Alexander von Wieding – also illustrator for Karma to Burn, Wo Fat, Monster Magnet, Freedom Hawk, Infernal Overdrive and countless others – and like its predecessors, it masterfully captures a swamp-boogie atmosphere, updating blues and rock traditions with a down-home psychedelia that’s alternately creeping and malevolent and raising its hands in upbeat testimony. Based in Hamburg and begun in 2008, Larman Clamor pays a heavy debt to Delta blues (John Lee Hooker, Robert Johnson, Mississippi Fred MacDowell), but has never sounded so much like itself as on Alligator Heart.

Where Frogs reveled in its post-Tom Waits weirdness and von Wieding’s gravelly vocals, Alligator Heart strips away some of the extras to get at Larman Clamor’s muddy, folkish heart. Short ditties like “Banshee w’Me,” “Done No Good” and “I’m Buildin’ Ruins” stomp and clang as ever, but with surprisingly ripe hooks, and atmospheric pieces like “Sambucus Nigra” and the 16 Horsepower-style banjo echo of “Crow on a Wagon Wheel” show a side of Larman Clamor that’s able to make a case as much with minimalism as with an onslaught of varied elements. Rounding out with “Aether Bound I – Scorched Earth” and “Aether Bound II – Dust & Ghost,” Alligator Heart ultimately shows von Wieding’s most accomplished songwriting to date, and that as he pushes further away from the shore to get swept up in that river’s current, the results are all the more rewarding.

Blending acoustic and electric guitar, simple drums and throaty vocals, Larman Clamor presents an alternate view of tradition and a new take on its own approach. More and more, there’s nothing else that sounds quite like it.

So while you wait on the corner of that crossroad for the parade to go by, just make sure you keep a count of all your fingers. Alligator Heart has a bite with some mean teeth.