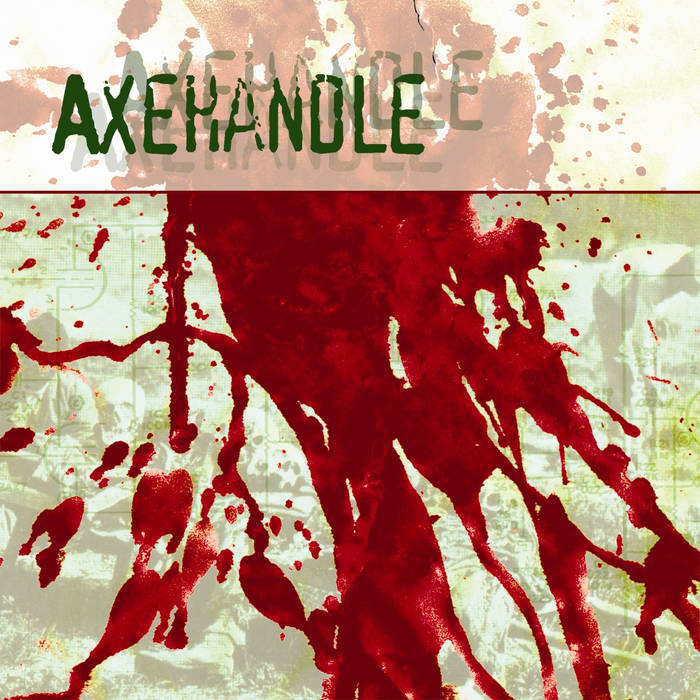 Rhett Huebschmann Not sure whose head the business end of this axe is buried in, but the handle still carries a wallop of its own! Dual drumming madness that I can only describe as heavy stoner, that didn't get near the recognition it deserved. Glad I stumbled upon this gem whilst digging through the Bandcamp mines. Favorite track: Pulp.

Roadburn Magazine
The fact that Axehandle is comprised of 3/5 of Alabama Thunderpussy is not what drew me to this album. What made me giddy about this release was when I read that there were two drummers ripping away "not in a jam band kind of way, but in a crushing tribal way." Even at that, Erik Larson said, "We wanted to create a sort of soundscape with the songs." Hot damn! That's enough to spark anyone's curiosity.

Replaying [more times than I'd care to admit] the album's excellent first track, "Face Down", on the Small Stone Records Jukebox caused my anticipation to turn rabid. If this song was any indication to the rest of Axehandle's debut self-titled release there was no doubt in my mind that this album would be nothing short of savage greatness.

But NAY! This CD is, sadly, not all it's made out to be. The root of the problem lies in the fact that, as a whole, it's not as amazing as it could be. It lacks focus. Sections, even whole tracks, just aren't up to par. Instances like these suck the life out of the precious moments when you can really hear what makes Axehandle stand out...

Indeed, there are moments when, lyrically, vocalist / guitarist Ryan Lake puts you right there with him; eyes blazing with lust and fury, the sweet taste of blood tickling your tongue, or on the floor screaming in helpless agony for someone to stop some psycho bitch from eating you for dinner. These are the moments that take us to the primal, animalistic areas of our psyche that we intentionally disregard.

These are also moments when drummers Brian Cox and Erik Larson feed off of each other without mimicking what the other just played, no matter how aggressively performed. When the thick guitars roll along, the drumming is the force behind their motion. Sometimes, when Lake spaces it out, Cox and Larson proceed to keep their presence known. Again, this is Axehandle; you know, the band with the two drummers.

Sadly, there are times when Cox and Larson play the same beat simultaneously with the occasional flam scattered here and there. No, no, no, flams and ghost notes don't cut it, gents. This is another slight beef I have with this CD. The drumming, again, as a whole, isn't all it could be. The rhythmic potential and lead was not fully achieved.

I wonder if the band might have put TOO much effort trying to create their desired "soundscape." In doing so, 1/2 of the material wouldn't sound out of place on an Alabama Thunderpussy album. And that's fine...for ATP. But, for now, I want to hear Axehandle.

Bio:
"I always wanted to do a multi layered drum band. But not in a jam band kind of way, in a crushing tribal way." So says Erik Larson of Axehandle, a power trio unlike any other. Indeed "Power" is the first thing that you hear on Axehandle's debut. Recorded in true stereo, you will feel the band surround you every step of the way. At times it's a head splitting drumming overload, and others a slow building melody of doom ladened guitar waves. "We wanted to create a sort of soundscape with the songs. Not just a whole lot of banging on drums with some heavy riffs laid over the top, but a whole experience that takes you to the place the lyrics are describing. Kind of like a bad trip that you don't want to leave." A statement hard to believe and yet irresistible when considering the lyrical topics of revenge, serial killers, mutilation and general human carnage set to the lush and dense musical backdrop of such songs as "All Redheads are crazy" or "Pulp".
Consisting of Erik Larson (Drums/percussion/Vocals), Bryan Cox (Drums/Percussion) and Ryan Lake (Guitars/bass) this may appear to be an Alabama Thunder Pussy side project (which technically it is) but don't be fooled. Axehandle is a chance for Erik and the boys to examine ground untrodden by ATP and expand beyond the confines of genre and style and create something totally unique.

Recorded by Vince Burke (Guitarist for Beaten Back To Pure) in a weekend of beer fuel fury, Axehandle's debut album is a disturbingly addictive barrage of musical blood avarice. Axehandle draws the listener in with their tribalistic layering of rythmns and then swings dynamically between melody and bone crushing metal the way most bands move from chorus to verse. Don't be fooled by the sense of security a song title like "Self Help" can provide, for underneath is something sinister as in the message behind the beautiful ballad "The damage that can be done at the ocean." It only gets more addictive when coupled with songs like "Face Down" and "Fine Food". It's like being invited to a dinner party and then finding out you're the main course. You have been warned. Meet Axehandle..