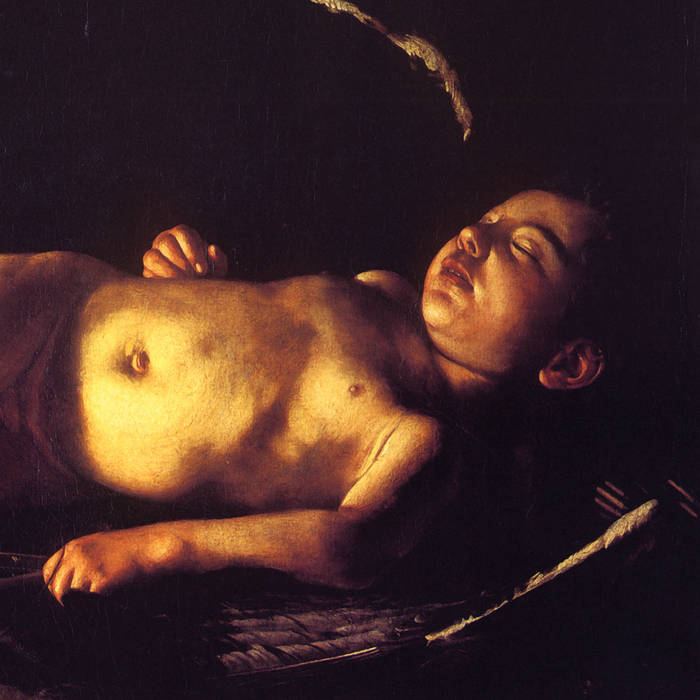 Jay Lane Tim, Billy, and Dale...nuff said. A classic, must have album for fans of Mans Ruin & co.

On his newest release, there is obvious veil of maleficence and sickness. This is evident before you even open the CD case. The cover is a pallid, bloated boy/cherub done in chiaroscuro style reminiscent of the old Italian masters. The painting style serves to enhance the cherub's sickly/sweaty sheen, and the fact that it's reclining in some of post-coital or heroin-induced bliss provokes deeply unsettling thoughts.
Once you've actually put the CD on, the lyrics bring overt drug references, satanic references, and much more unsettlingly, the refrain from "Last Song", during which Moss states repeatedly "I saw you looking out my window last night." This is made even lewder by the fact that the production places him behind you and leaning very close to your era while he says it.

The vocal production makes the most of Moss' somewhat limited singing ability by moving him all over the mix to alternately maximize his howling and his more personal speaking/incanting style. Devil Moss clearly ] channels the dark side, but he's also a relentless innovator and maximum volume hound, both of which are traits I admire.

His latest backing band is the all-star team of Billy Anderson on bass [and production] and Dale Crover on drums. Calling them rock solid is no hyperbole. Moss takes this behemoth [and consistently interesting] rhythm] section to the furthest reaches of space and stoner rock and then sends back twisted and plaintive missives with his nearly human sounding slide guitar howls.

"Wine, Women and Song" moves from these deep spacey jams to sharp, angular riffing with complete ease. There is a tremendous amount of ebb and flow on the whole record, with long quiet builds setting up supremely satisfying riff bashing. Throw in some great songs, stellar production and a monster rhythm section, and you have that most elusive of records, familiar enough to be easily digestible, and complex enough to listen to over and over.

In contemporary terms, this record thouches on Ufomammut, Kyuss, Jesus Lizard, Melvins and Fuckemos. In classic terms there are traces of Black Sabbath, Hawkwind and Pink Floyd. A very tasty melange indeed, all served up with super loud and heavy production destined to destroy iPod headsets the world over.
This has the hallmarks [earmarks?] of an album with tremendous staying power, it's consistently heavy and consistently interesting. So good it's sinful!

Bio:
Here's a funny experiment. Find yourself a radio, the old fashioned kind that’s not connected to your computer. Turn it on and spin the dial. Where ever it lands leave it and just listen for a few minutes; ten or so should be plenty. Most likely one of two things will happen. Either you’ll quickly enter the candy coated landscape of your childhood, fondly reminiscing about old relationships, better times, and your first sexual experience or (and more likely) you’re going to be madder than hell and ready to smash things to pieces. If the latter is the case then we offer you a sounder solution than trashing your pad. “Women, Wine and Song” the latest effort by San Francisco outfit known as Porn (The Men Of) has enough destructive might packed into 50+ minutes to make up for almost any duration of pop radio exposure.

If you’re familiar with Porn, "The Men of" that is, then you’re aware that they always have guest players on tour and in the recording studio. This time out reunites brain-child Tim Moss (Ritual Device) with longtime pals Billy Anderson (far too many to list) on bass and Dale Crover (Melvins, Nirvana) on drums. Their first recordings in almost three years (though technically the true follow-up to their man’s ruin debut “American Style,”) “Women, Wine and Songs” picks up right where Tim and Co. left off.... Drifting aimlessly in the coldest reaches of space where the stars align in such a way that it almost seems pre-destined that an album could be born of equal parts Black Sabbath, Verve, and Ornette Coleman. Angry fits of rhythm section melt seamlessly into avant-Iommi jazz and back to bone crushing rawk; and that’s just the first track.