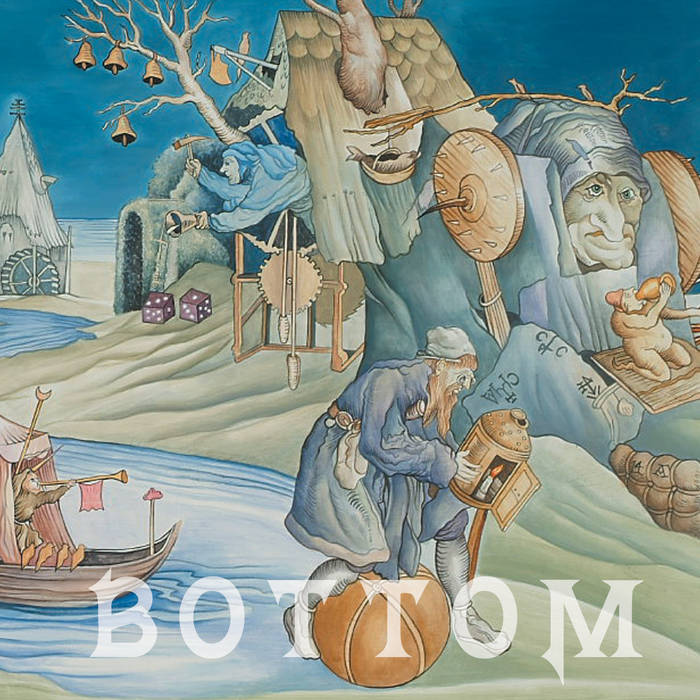 Hellride Music
you'reNext,' Bottom's third album, comes at you with one of the strongest left hooks you're likely to hear this year. Their first, self-released album, 'Maid In Voyage,' was a fine exercise in raw stoner metal played with passion and conviction. Those of us who saw this group of hardened road warriors ca. 1999-2001 know that this tuneage lent itself especially well to live performance. Then came the corrosive, brutal riff metal of 'Feels so Good When You're Gone,' a bloody exercise in pain and anguish that upped the stakes from the first album. If memory serves it was one of the last Man's Ruin discs, and Bottom's profile seemed a bit lower in the wake of the label's dissolution.

So its all the more surprising that Bottom should choose to present this unexpected aural snapshot as their comeback on the estimable Small Stone label. I don't usually do this, but I'll quote the press release: "'you'reNext' tells a gypsy lie using minor chords and wrenching howls and guitar tones that circle like ravenous buzzards." That tells the story
well, backed up by the fairy-tale art of the cover. There's no doubt, the album is experimental. The riffs are virtually gone; instead the guitar paints accent strokes while Nila's bass (and narration, some in her native German) rules all with Clementine's drums providing intermittent structure underneath. Sina's anguish is still there, and in some ways the
rather experimental structure of the music allows it a freer and more effective _expression. Make no mistake, the ladies were feeling experimental when they recorded this, and bravely decided to go with it and release it, expectations be damned. This will no doubt upset the more hidebound among us who are disappointed at not getting their money's worth of
expected riffage.

Suck it up and broaden your mind. Bottom is committed to the music, and I'm glad to honor that commitment by keeping an open mind for whatever they have on theirs. In some ways this is their best album, though certainly not the most comfortable. This music is more likely to remind you of the more outre efforts by the Melvins and Black Flag, or the no wave madness of DNA, early Sonic Youth, or Teenage Jesus. Hey, Bottom hails from New York City, maybe they remember those halcyon days of angular musical nihilism. In any case, the latest info is that they've got alot of music in the can that hearkens back to the metal days of 'Feels so Good.' So you malcontents are covered. Their next release will likely serve up the expected riffage, and I'll be there for that one as well. In the meantime, turn the lights off, spark up, and open your mind. In the long run this may turn out to be their most satisfying album.

Bio:
From the fiery bottom of New York City's Lower East Side, sexier than Satan himself, the all-femme rock-outfit BOTTOM continues to raise hell. Lead by three siren mosh-heads, BOTTOM is volume drenched metal built on a foundation of riff and heavy groove.

BOTTOM's second long player, "Feels So Good When You're Gone," was produced by studio guru Billy Anderson (Mr. Bungle, Neurosis, Sleep). After the fall of Mans Ruin Records, "Feels So" is proudly being re-issued by the band on Rise Above Records. Spinning a sinister tale in a glamorous landscape of the Apocalypse, "Feels so Good when You're Gone" is thick with monster riffs, killer hooks and guaranteed to simultaneously make your ears bleed and your doomed heart leap with joy.

BOTTOM's debut album, "Made in Voyage," was recorded in NYC, produced by Greg Gordon (engineer for Slayer, Helmet, and Public Enemy) and released in 1999 on the band's label Mudflap Records.

BOTTOM first escaped from New York City in April 1999, carving out a new world order for self-sufficient DIY touring bands: living in their van, playing 300 shows a year, taking no prisoners, and destroying a new town every night. Notorious road queens, BOTTOM spent the summer of 2001 cranking out a daily double-header with a crushing 70 shows in 40 odd days schedule: tearing up the Vans' WARPed Tour by day and headlining at their club tour by night.